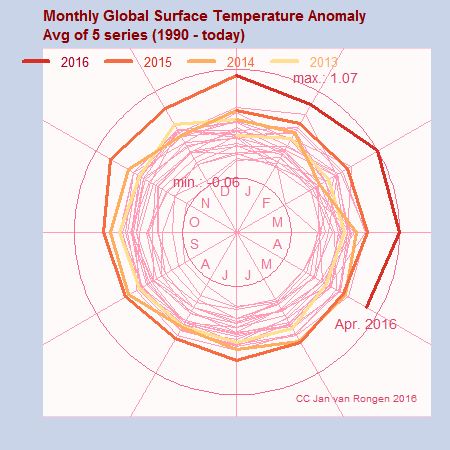 In the meantime showing a circular diagram has become popular. here is the avg of 5 series: HadCRUT4.4, GISS, NOAA, JMA and BEST.

The 12th month that this average is a record month. It is going down a bit after the El Nino has stopped, but not by much. This is what can be expected from the history of the El Nino’s: this is the average decrease.

We can also estimate what the rest of the year will do. EXtrenmes are more likely in the period from November to April, so we are entering the relative  more stable period from May to October. The deviation from the mean becomes less:  irt goes down from 0.12 in February to 0.7 in August. Also the auto-correlation becomes stronger.

If we put these facts in a forecast model we find that it is quite likely that we will have another couple of record months until October. The whole (average)  of 2016 is likely to end 0.2 degrees above 2015.